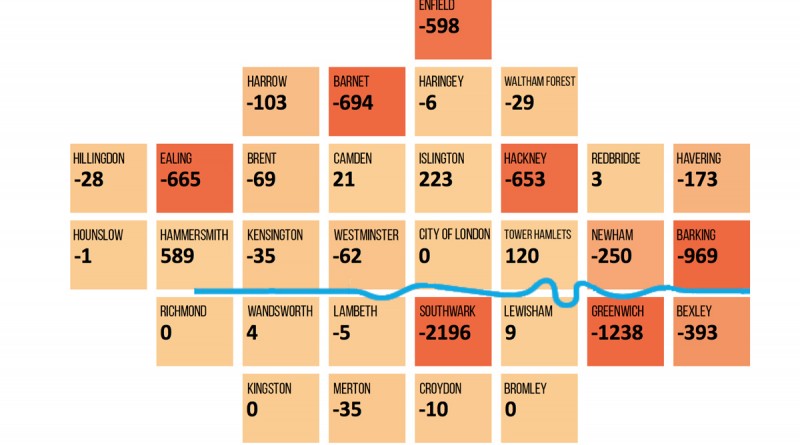 Thousands of social rented homes have been lost in the ‘regeneration’ of London’s council estates over the past 15 years, and much more is to come, I’ve revealed today.

My new analysis of all planning permissions in the London Development Database shows that 4,142 council homes have been lost in completed redevelopment schemes on sites containing existing social housing since 2003.

And the pace of demolition is accelerating. Looking at the pipeline of homes – schemes which have planning permission but have not been completed – shows that a further 7,612 social rented homes are set to be lost in ‘regeneration’ schemes over the coming years.

These new findings highlight that the loss of council homes in regeneration schemes isn’t confined to a few famous estates where residents are fighting large schemes, but is a widespread problem that is even more alarming when you look at the bigger picture.

My continued scrutiny of council home demolition in London follows up on work done in 2016 by my predecessor in the London Assembly, Darren Johnson,  and this issue has been a major focus of the work I’ve done since being elected in 2016.

Along with campaigners, we’ve made some progress. New rules on viability assessments are already in place from London Mayor Sadiq Khan, and in August he finalised a policy requiring resident ballots before demolition on large schemes, a result achieved only after a long battle.

The redevelopment of estates isn’t the only way that policies are whittling away at the numbers of council homes. When you put Right to Buy sales and selloffs by councils into the equation the numbers get even worse. On the other side of the balance there are some new developments which are adding net new homes – those on real brownfield sites that don’t affect existing homes. However we are now seeing a net loss of council homes overall.

The very least that should be achieved when a council estate is in need of work is the net gain of council homes.

People on estates across London are working on their own ‘people’s plans’ for their areas and coming up with ways to put new homes on estates without needless demolition. The Mayor has given them the right to a ballot over plans that come from their landlords, but more needs to be done to empower residents to plan their own improvements. This is how we will really prevent the continued loss of social housing capacity on the scale I’ve revealed today.

The figures across London

The number of lost homes varies across the different London boroughs, as shown in the maps below. The worst borough, both for past schemes and future plans, is Southwark, where fierce regeneration battles about the Heygate and Aylesbury estates have been fought. So far 624 homes have been lost in completed schemes, with 2,196 set to be lost in future.

Other boroughs with both a poor record and worrying losses in future redevelopments of their estates are Barking, Barnet and Hackney.

There appears to be very little regeneration activity so far in some outer London boroughs like Richmond and Hillingdon, but the pace of demolition and net loss is accelerating in others, such as Enfield, Ealing and Bromley.

In Greenwich, previous schemes have led to the loss of 353 social rented homes, but the pipeline of schemes with new permissions will lead to 1,238 lost council homes in future.

Lambeth is the home of many residents fighting proposed regeneration schemes that have not yet come forward for planning permission so these figures don’t for example include Cressingham Gardens or Central Hill. Its past record is fairly decent and it has a chance now to keep it that way. So far in the borough there has been a net gain of 275 social rented homes across its schemes, and in its future schemes with planning permission 5 homes are set to be lost.

One borough with a net gain across both sets of schemes is Islington, with an increase of 99 homes in completed schemes so far, and a net gain of 223 homes planned in future. Hammersmith & Fulham saw a net loss of 61 homes in earlier plans but has given permission more recently for schemes that will add 589 new social rented homes to the borough.

These figures show that there are choices boroughs have made in the past, and for the future, that lead to very different outcomes for the loss or gain of social housing in their areas when estate plans are made.