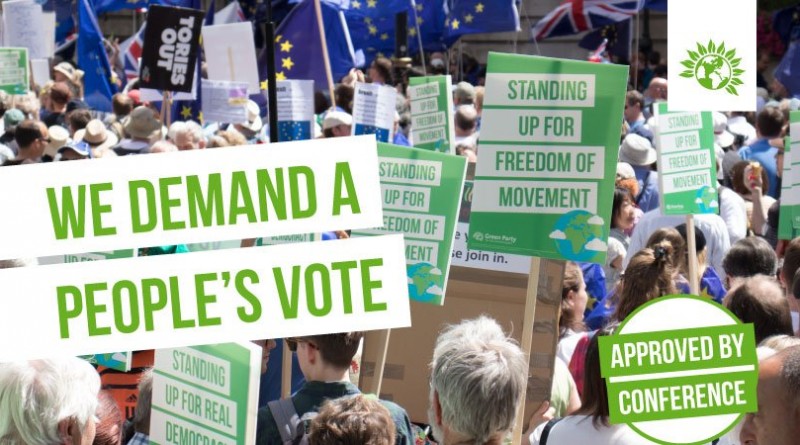 Brexit was always going to be bad for London. But now that it looks likely that the UK is going to crash out of the EU with no deal, the impact will be even worse than feared.

I was pleased this week to get a Green motion through the Assembly (supported by the Lib Dem and Labour members) calling on the Mayor to back a People’s Vote on Brexit.

Update: And this was very quickly a call the Mayor picked up. Since then, he has thrown his full weight behind the campaign – see his tweet below.

The 2016 referendum was the start of a process and not the final word, not least because none of the terms of how we would leave were on the table back then. There isn’t much more clarity now as the negotiations are going so badly, and giving people a final say is more important than ever, including the option to stay in the EU if all we are offered is a bad deal or a crash-out no deal.

I’m heartened to see the Mayor use his influence to join us in the campaign to say enough to the chaos and yes to a final say for the people on Brexit.

Of course, if people like the final deal, they would still be able to vote to leave. But from what I can see most citizens are frankly shocked at the chaos they have seen unfolding and want a chance to end it.

We’re right to be worried about Brexit, there could be up to 87,000 fewer jobs in London by 2030 than there otherwise would have been, according to a Cambridge Econometrics report commissioned by the Mayor last year.

The report showed that the capital’s economic output would shrink around 2 per cent, which while less than other places in the UK, this would still hit the poorest in our city first and would widen the existing gap between London’s economy and that of other regions. There is no Brexit dividend for any of us.

Away from the economy, Brexit is also damaging our communities and our social fabric. EU nationals living here are our neighbours, our partners, our colleagues, our friends. Yet they still find themselves in limbo.

The Office for National Statistics shows there are more than 100,000 officially recorded couples in London where one British national is in a relationship with someone of another EU nationality. The government’s offer of settled status for EU citizens relies on a successful outcome of the Brexit negotiations. If talks fail, these 100,000 people and around 900,000 other Londoners who are EU citizens will not have a guarantee that their rights to stay and work would be protected.

Our strong links to Europe and our international outlook and social ties meant hat London as a region voted by a clear margin to remain in the EU in 2016. And, at the last count, 68 per cent of Londoners think the government is doing badly at Brexit negotiations.

Brexit is being forced on the capital against its will, but our city is arguing back and calling for a final say – the People’s Vote that we all need to end this disastrous episode in our history.

The Mayor can say this quite contentious thing using his GLA account and branding because a majority of the Assembly backed a cross party, Green proposed motion to call on him to back a People’s Vote. This is now London’s official view, basically. https://t.co/OqFzqIyW2K