In July, I launched the Big Renters Survey to ask other private renters in London about the problems they have had and how they think they could be better represented.

As a renter in London for nearly 20 years, it’s important to me that I keep bringing the voices of London’s 2.3 million private renters into City Hall. In this report I’m recommending that the Mayor stands up for London’s private renters and supports them in standing up for themselves.

More and more people are finding themselves privately renting for the long term, not just as a temporary option while they are young, and the results of my survey show that many of them very unhappy with their situation.

More help and information for renters
Provided by the GLA, with a central information source and links to existing groups and council schemes.

Better regulation and support for landlords
With support at the London level to ensure consistent council enforcement, training and licensing.

Enhanced regulation of the sector nationally
With continued pressure from the Mayor, Assembly and London’s borough councils for powers to be devolved to London.

Read the full report, the results and detailed recommendations here

Find out what renters have said about your area:

The results across London

1,530 renters told me their views. As well as completing the multiple choice questions, an extraordinary 68 per cent also took the time to write in more details of their experiences.

For problems renters have ever experienced with costs and contracts, the most common was getting deposits back, with more than half of respondents reporting this.

However, for problems experienced in the past three years, the most common among renters was a rent rise they struggled to afford.

The average proportion of take-home pay spent on rent was 46 per cent. This figure did not fall below the generally accepted definition of ‘affordability’ (around 35 per cent) in any GLA constituency area. 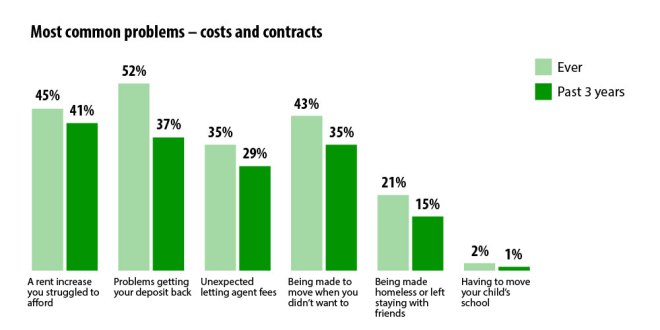 Three quarters of respondents had problems with repairs and maintenance not being done, and two thirds have worried about complaining or asking for repairs for fear of being evicted or facing rent rises.

Damp and mould problems were reported by 64 per cent of people, with a further 14 per cent writing about these issues in additional comments. 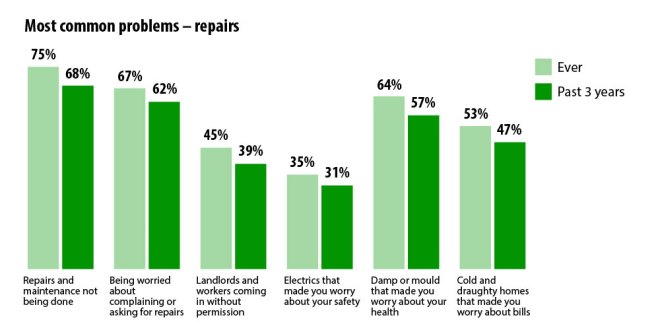 In additional comments, renters quite often described landlords and agents responding to requests for repairs with implicit or explicit threats to increase rents or even evict tenants. This is despite these kinds of ‘retaliatory evictions’ being illegal since 2015.

What do people think of their last letting agents? 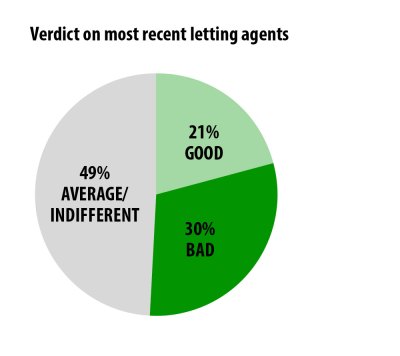 I asked renters to rate the experience they had with their last letting agent.

Common themes within written comments on letting agents were:

What do people want a renters organisation to do?

As part of the survey, I put forward the idea of a London-wide renters organisation and asked about what it could do for them.

All kinds of help and action proposed were ranked highly for importance, and the options roughly fell into three groups in terms of popularity: 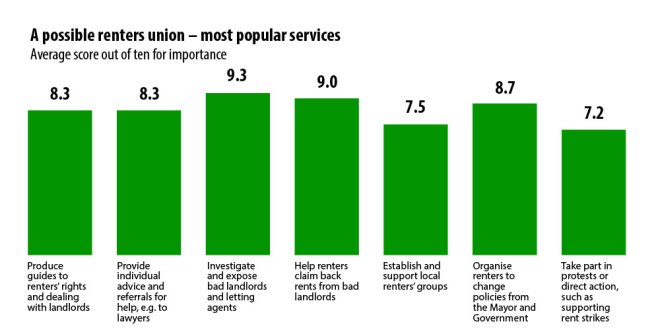 What will renters do themselves?

Finally, I asked what action people would be prepared to take themselves as part of a renters organisation.

Considering the time and effort involved in doing things like joining a local group, this was surprisingly popular, with nearly half of renters willing to do this. Exactly 50 per cent were willing to do targeted actions to help expose bad letting agents.

Significantly, 57 per cent of renters would be willing to pay a small fee to join up, which means such a group could become self-sustaining if it was given help to set up by the Mayor. 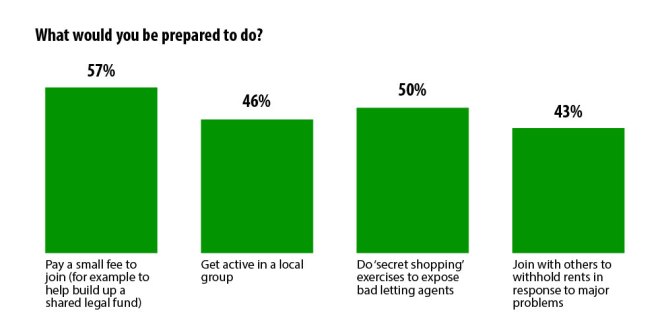 Read the full report, the results and detailed recommendations here

What you told me “I went to view a nice property and paid an upfront 'holding' fee of £250. Days later we were told that this was now for a different property, which I discovered when viewing , didn't suit us at all. They continued to mess us around. After calling Citizens Advice and Shelter, we decided not to take the flat, losing the £250 deposit . The whole experience was horribly stressful, time-consuming and has made me seriously worried about moving again.” “It would be good to have register of decent landlords because renting in London just a lottery as to whether I would get a good landlord or not. Other friends I know who moved to London at the same time as me were not so lucky.” "Both of the last two houses I lived in had big damp problems in the bedrooms and bathrooms. Both times the agents solution was to redecorate - essentially concealing the problem and not solving it. The first one took a long time to sort out. The second one was sorted quickly but the problem returned within the two years I stayed there."