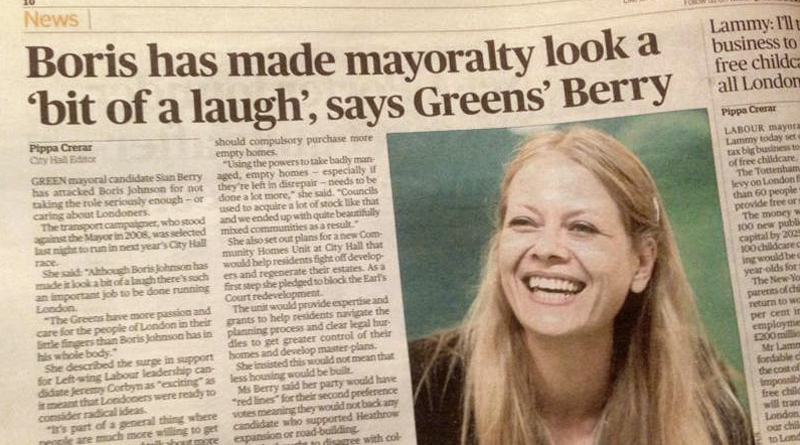 The results were announced on Wednesday, and I’m so thrilled to have been selected as our Mayoral candidate for 2016, and to be first on the London Assembly list!

Thank you again to the Green Party elections team and all the brilliant, talented people who helped me with my campaign to be selected, and to everyone who supported me.

Politics now is really exciting. It feels like politicians and parties with principles can truly achieve something, and people are ready to get involved. I can’t wait to get going on this campaign!

In fact I haven’t, and we got some really nice coverage of the announcement and our new housing policies already, also on BBC and ITV London news.

And today I called

for the GLA’s closed fire and police stations (currently under-occupied by property guardians) to be offered for emergency accommodation for refugees while we find permanent homes through councils. I also called again for Camden to take more vulnerable families in and this looks to be something they are finally doing, after I first raised this in April.

Below is the acceptance speech I made at the West Kensington Estate tenants hall on Wednesday, and you can read the London Green Party press release here. Bright Green here has the full numbers for the Mayoral vote too.

This campaign has had a lot of work go into it and all of us candidates are in debt to the people – including our two London co-ordinators Caroline and Tom, our communications team Matt and Clare, our election agent Laura, and the returning officers Adrian and Jon – who have made sure it ran smoothly, competitively and in good spirit without purges, plots or in fact any such shenanigans at all!

I want to thank Caroline, Jonathan, Rashid, Tom, and Benali for a great campaign and debates – it’s clear we think so similarly on so many things, and I want you to know how much I’ve respected you all, and how much your ideas need to form part of the joint campaign we’ll all be running from now on.

With our surge in members in London – trebling since January alone – and our vote in May’s General Election trebling as well across the city, this is our opportunity to build on Jenny Jones’s brilliant third place in 2012 and run our most exciting campaign ever.

Rashid Nix has said many times in hustings that Boris Johnson won City Hall because one in eight Londoners voted for him. That’s all, with a tight race, a turnout below 40%, and not all citizens on the electoral roll – just 1 in 8 of our people chose our Mayor.

I’m so delighted to be chosen to be part of a Green campaign that will seek new voices in this election, and work within communities, with young people not yet able to vote, and with people whose citizenship means they aren’t allowed. Everyone in London deserves a voice in who runs our city, and our party will help everyone be heard.

Although Boris Johnson has made it look like a bit of a laugh, there’s such an important job to be done governing London, and I’m a Green because I think we have the best ideas for how to do it.

And out there politics has never been as exciting as it is now, since I joined the party 14 years ago, with more and more people now willing to join causes and campaigns. The city is ready for us, and every Londoner I think will relish the chance for a more radical debate on our city’s future in this election.

They will I think relish and vote for the prospect of Greens with more Assembly Members, holding the balance of power on the Assembly and on the budget as we have done before, and building on the 16 years of hard work by Darren and Jenny,

We are different to the other parties who want these jobs. We want them because we want to give London back to Londoners. All the Greens here today have more passion and care for the people of this city in their little fingers than Boris Johnson has in his whole body, and we are ready to fight for the chance to take over from him, and win a stronger mandate for our party and its ideas.

For most Londoners, including me, housing is the absolute key problem to sort out.

A city is first and foremost a home for its people. And when we have a Mayor and borough councils who are not just failing to provide new, truly affordable homes, but actively driving people out of their homes and out of their city, someone has to come up with a better plan.

Greens want London to be a community again – a place where anyone can come and live, work, play, and feel at home. A community where the people who live in an area get to decide what happens when an estate needs a revamp or a brownfield site needs developing. And get to decide what happens based on the needs of the community – not the need for the biggest property companies in the land to make the biggest profits they can.

The chance we have to create a different kind of life for Londoners is captured perfectly by what is happening here on the West Kensington Estate. The residents who live here don’t want to see it bulldozed and turned into a new private development. They want to remain in their homes surrounded by the community they love, and feel as though they have ownership over their own future.

And I am pledging today to listen to them, and that, if elected as Mayor I will block the Earls Court Regeneration Scheme, and support the residents in their bid to take over their homes and take the lead on the regeneration of the West Kensington and Gibbs Green estates.

This will be the first of many schemes like this, because the solution they have proposed is the inspiration for a new policy we are announcing today too.

In City Hall, we would put resources and staff into a new Community Homes Unit to support community-led housing schemes, including and especially in estate regeneration.

Like the West Kensington residents have done, we have based this on a successful model in Cornwall, where 13 community-led housing schemes (in community land trusts) have been finished since 2009. London needs the support this unit would provide because the fight being faced by residents here at West Ken is not an isolated one.

But our Community Homes Unit is a positive, affordable step that will help. It will act to help stop the need everyone has to put a decent roof over their heads from being exploited, and help our citizens find new ways of making London truly affordable again.

London belongs to all of us, and our team of candidates and our Green campaign will work with communities all over the city to win more power for the people next May. 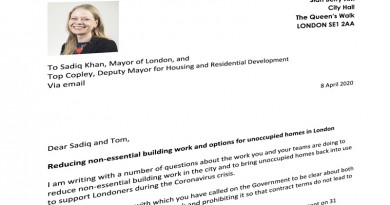 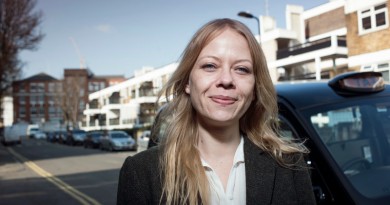 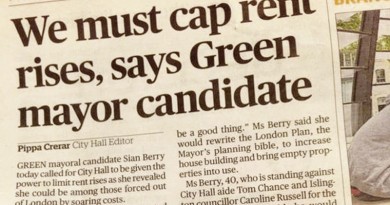