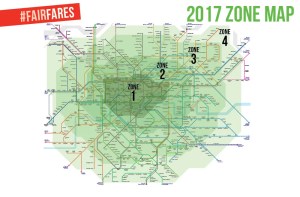 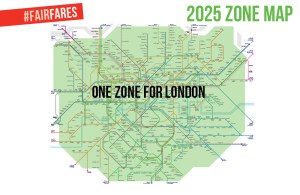 London’s transport isn’t serving everyone equally. It’s not fair that people in outer London pay so much more to get to work on public transport. Or that part-time workers pay more per day than those who save with season tickets.

And it’s not fair that if you need to take two buses or more than one type of transport you pay twice or three times for the same journey.

If you support flat fares and a better deal for Londoners, sign up now to back our plans:

We will ensure public transport is always the simple and affordable choice, without hidden penalties if you live in outer London, work part time, need to take two buses, or change between tube, bus and train on your way.

In January 2017 we will merge zone 3 with zone 4 and zone 5 with zone 6, adopting the lower fare rate in each new zone.

We will create a simpler four-zone structure, and also cut the cost of fares for people in the current zone 5. Combined, these changes will give everyone in outer London a cheaper journey to work by rail and tube next year.

In the following years, fares in the new zone 4 will receive successive cuts in real terms, reducing the difference between costs for people in outer boroughs even further. By continuing this process, we believe we can achieve a flat fare structure with one zone across London for travelcards and daily caps by 2022-2023 and completely flat fares by 2025.

We will never apply a fare rise above current plans, but still estimate that we will be able to abolish all zone differences by around 2025 (the exact date depends on future inflation rates) and create a completely equal fare system for all Londoners.

When you use public transport, you simply want to get somewhere in the most convenient way, but the current ticketing system makes that difficult.

We will turn single fares into a ‘ONE Ticket’, based on time and direction, which covers all transport modes and never charges you more than once for trips that make up one journey. This automatically includes a one-hour bus ticket and links up nearby stations – changing between modes will be free for any two stations within a short bus ride or walk.

The unfairness of not being able to change buses in the same way you can on the tube is well known, but there are many other interchanges – between buses and tubes and trains – which add costs to journeys and limit route options for people on lower incomes. Only a few stations on the Overground allow free changes to nearby tube stations, and many people on the tube could benefit from switching to the bus in central London to reach their final destinations.

Until recently, there was a huge, discriminatory difference in cost between pay-as-you-go daily caps on travel costs and what you could save with a weekly or monthly ticket. This was very unfair to part-time workers, who are often also paid the least.

The problem has been only partly solved by new rates for daily oyster caps that are one fifth of the cost of a weekly pass. However this still means people who work part time pay more than people who pay monthly.

To close this gap properly in 2017 we will reduce the rates for part-time workers, with daily caps set at one twentieth of the cost of a monthly travelcard.

INTEGRATED PAYMENTS WITH BIKE HIRE AND OTHER SERVICES

In central London, we want to help more people walk and use London’s hire bikes for the last stages of their journeys, to reduce congestion at key stations on the tube. This means making registration for cycle hire automatic with an oyster card and integrating payments with contactless and our new ‘ONE Ticket’.

We will also work with car clubs, taxis, river boats and other services to ensure that contactless and oyster payments are also linked up with their systems. We want people to have many more flexible options for making journeys, which will also cut the congestion, pollution and parking problems caused when people end up using cars for trips they should be able to make with Transport for London’s help.