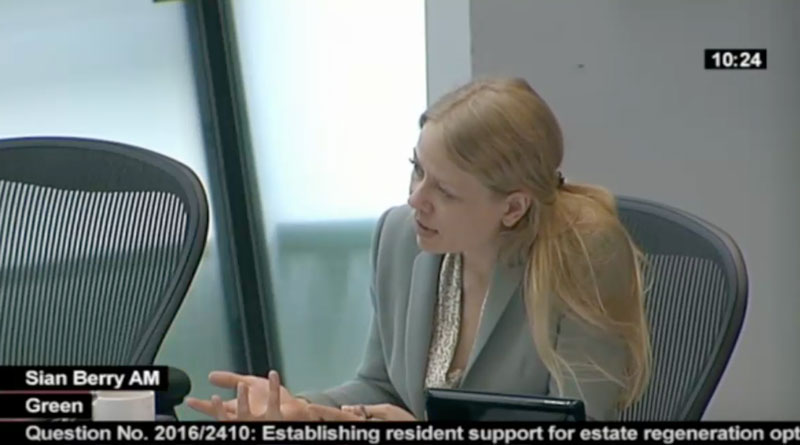 At today’s Mayor’s Question Time I won some valuable promises for the rights of private renters on council estates.

My set of questions this morning were all to do with estate regeneration, where we’ve seen serious problems with residents not being listened to when councils make development plans.

I first raised the issue of private renters – many of whom rent relatively cheaply in former right-to-buy homes on estates – being excluded and overloooked when regeneration plans are made. Many councils completely omit private renters from their communications (writing only to the council tenants and leaseholders) and so don’t give them the chance to take part at all.

After he had skirted the issue in written questions, today I managed finally to get the Mayor to commit to including private renters in the new consultation and development processes he has promised to create in a new guidance document that councils and developers will have to follow.

The really good thing about the Mayor’s answer was that he basically said he had listened to my views and thought about them and decided to do what I had previously asked. I’m genuinely happy about that.

What happens to private renters as plans progress is important too, as they are often evicted early in the process without any right to return (because they have so few rights in general too).

Today I also asked about how he will measure whether residents on estates support regeneration options, in particular whether he will use ballots to make certain. I’ve pushed him on this before too and in his answers to these questions today he was less clear about what he would do. I was, however, promised a meeting with the Deputy Mayor to discuss all these issues, and this was set up straight away this afternoon and is now in my diary.

If we do get guidance that says any regeneration options – including demolition – will only be allowed after a ballot of residents, then including private renters will be something I’ll push hard on there too. And I’ll work to make sure it comes in as soon as possible to help residents facing demolition now, on estates like Central Hill in Lambeth and Cambridge Road in Kingston, which I have visited recently.

The video of my question and the Mayor’s answers is here:

And pushing for PR

Later in the session, while Green MP Caroline Lucas was pushing for proportional representation in Westminster with a bill to reform the voting system, I raised the issue as part of questions on democracy from Tory AM Andrew Boff.

Caroline’s bill for fair votes was narrowly voted down after the Labour Party whipped their MPs to abstain – which is very disappointing to say the least. Several Labour MPs who support fair voting – like the Mayor as he said in his reply to me – did rebel and vote for the bill, and there is growing support from citizens to make their votes count too. As elected Greens we will all keep pushing to fix our broken electoral system! 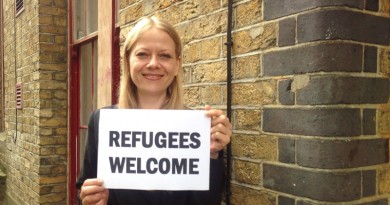 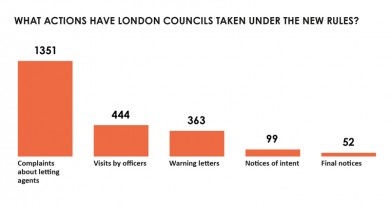 Letting them get away with it – ban on agent fees needed 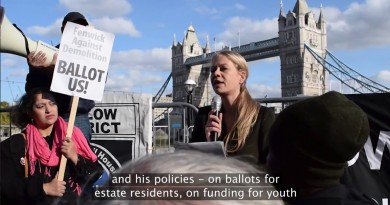 Demonstrators call for ballots for all estates at City Hall protest